This study is focused on performance optimization for underwater fishing equipment. The object of interest is a spear of a fishing shooting rifle, and the aimed goal is to identify a solution able to increase spear velocity and range, as well as increase shooting power, at no cost from the rifle point of view.

When objects move at (relatively) high velocities inside (relatively) high density fluids like water, every little detail can make a very huge difference. With the aid of a very accurate software, it is possible to simulate the physics involved, and identify geometry modifications resulting in improved performances.

Artificial Twin | PhyMo™ is designed to perform exactly these tasks: it allows to virtually replicate real world conditions in order to spot non-optimal design choices, enabling the user to test shape modifications without the need to produce physical prototypes.

As demonstrated by this study results (reported below), even a very small shape tweak could result in a relevant gain in terms of shooting power. In fact, the best solution among those that have been tested, saves 6.17 Watts in power thanks to a lower drag force. 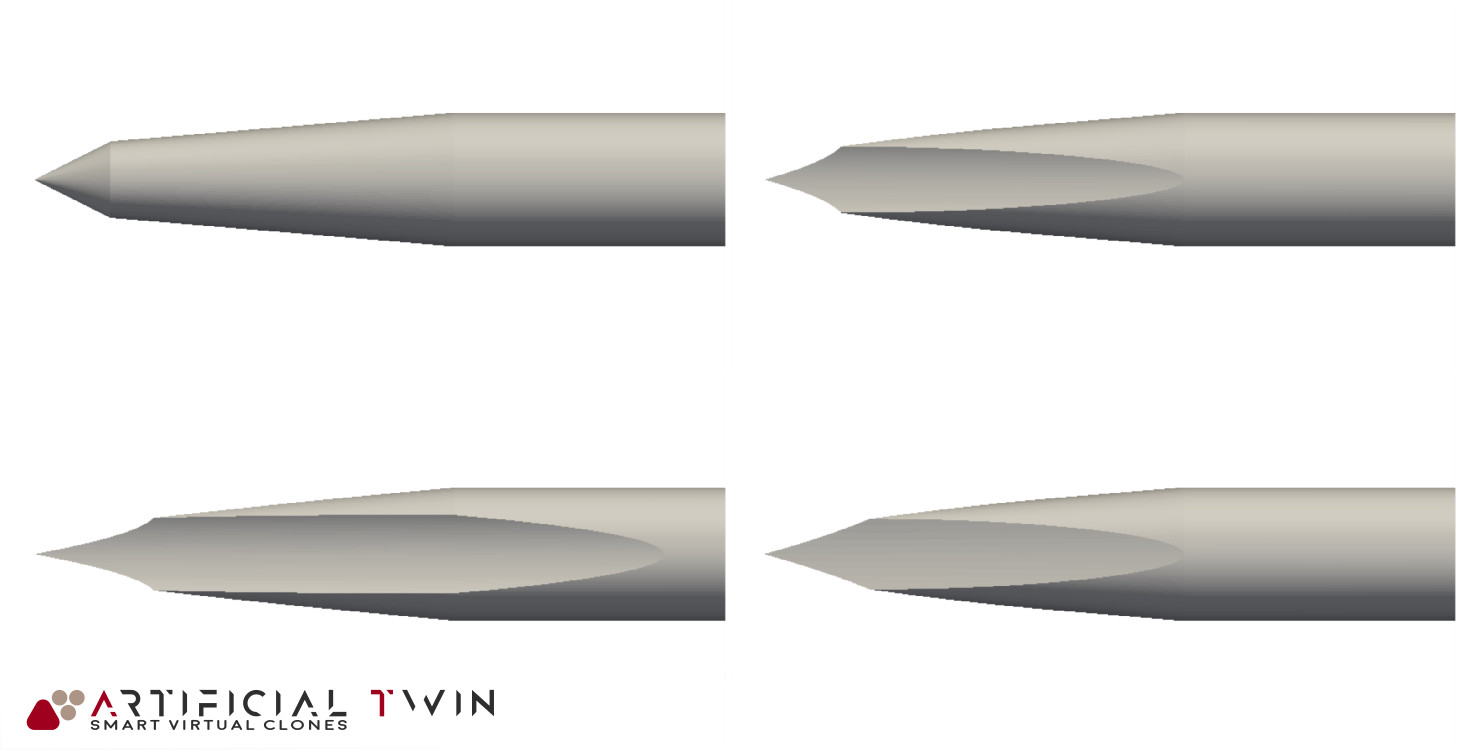 The idea under test, and its variants

In this study, one central idea has been investigated. The standard shape of the spear tip is conical (see figure on the left). With the intent of improving water penetration, field tests have been performed using a modified version of the standard tip: it mainly consists in creating cutting edges, removing three circular shaped areas from the conical tip, spaced 120 degrees apart one from the other. Angles driving removal directions and diameter of the removed area are the main parameters governing the resulting modified shape.

In this study three different modified tip shapes have been tested, together with the standard one (see figure on the left). The main goal was to compare the four different solutions in terms of drag force performance, in order to evaluate which one has the highest efficiency (lowest drag).

The motivation behind this analysis is strictly linked with performance optimization. A given fishing rifle has a given shooting power. Finding an optimal spear shape which minimizes drag, allows to improve performances (shooting power, spear velocity and range) at no cost from the rifle point of view.

Drag estimation is one of the most common applications of Computational Fluid Dynamics, and one of Artificial Twin | PhyMo™ modules is dedicated to this specific task. Each model to test is loaded into the application, the computational grid is created and the RANS solver with turbulence model and appropriate boundary conditions is used to complete the simulation run.

Results are then post processed: field variables like velocity and pressure undergo some elaborations (vectorial projections, surface integration, etc.) to calculate the performance index of interest.

All quantities are obtained by means of virtual tests: no real prototype is needed, nor lab experiments. This clearly allows to investigate a huge number of different solutions at very low cost.

Results coming from this study are summarized in the figure on the right. As clearly shown from the bar chart, all three modified geometries have a significantly improved performance with respect to the standard one. Images showing pressure variable on the left are quite self explanatory: the scale is blue to red, ranging from low to high pressure values. It is evident how the standard tip geometry, having a less “penetrating” shape, induces a high pressure zone which then causes a higher drag force. 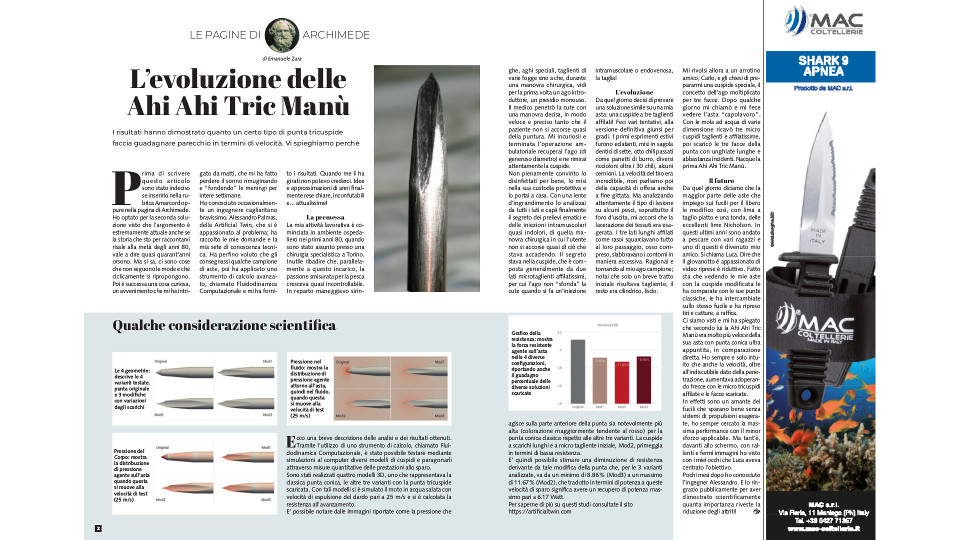 A tool to boost efficiency optimization

This study addressed a very specific detail of fishing spear design. The tip shape is of course just one element among many others which have a strong influence on the hydrodynamic performances.

In order to have a complete view of all the critical factors influencing the performance, one should also examine the fish retention mechanism, the string clamping device, all sharp edges, and so on. Nevertheless, it all can be done as in this analysis: using an accurate, state of the art, physical modeling software like Artificial Twin | PhyMo™, it is possible to optimize every single element to achieve an optimal design.

During last few years, these advanced technologies, originally adopted only in fields like Aerospace and Automotive, have finally reached a very broad adoption. With the right software and professional support, every company and professional can take advantage of these powerful tools.